From the Executive Director 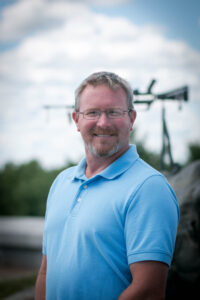 I was challenged to participate in the 36th Annual Bike Tour about one month before the ride by one of our volunteers, Mike Gleisner. I had never ridden more than a few miles at a time let alone 40 to 60 miles in one day. My wife said I was crazy to even try it. But as a Marine, I naturally accepted the challenge.
My preparation began by purchasing a used bike and new riding and safety equipment. But my training consisted of letting that equipment rest in my garage until the day of the ride! (My backside had only about 20 seconds in the seat and the new tires were not even dirty.)

On Day One I had two mechanical difficulties, one was a quick fix in the parking lot. The other was about eight miles into the ride, leaving me walking versus riding. Luckily, after a few minutes I was picked up by a passing vehicle, conveniently driven by a Navy Vietnam Veteran. I never thought I would be getting a ride from the Navy again! I was able to make it to the Sports Den in Marshfield for repairs and meet with the riders to painfully complete that day’s route.

On Day Two I had a welcomed relief due to Stone Ceremonies at The Highground.

On Day Three I rode with the Western route. Oh, did it hurt! But do you know what? I would do it all over again. Here’s why. As I was peddling desperately to keep up with the experienced riders, (which was all of them) my legs were on fire, my bottom was beyond sore from that terribly, uncomfortable bike seat, and low and behold there was a hill! In my case, a mountain in my mind.

Struggling to climb that mountain, I started to get passed by another rider. She started talking to me, and the next thing I know I am at the top of the hill, coasting down the other side. A half mile later there was another “mountain.” The pain in my legs was almost unbearable, my bottom felt like I was sitting on a corn cob, and all I want to do was give up. Another rider started to pass me. But he also struck up a conversation. Again, I made it to the top and coasted down the hill. Every hill continued to be a larger, harder hill to climb, filled with unbelievable pain in my legs, bottom and chest. I thought several times I should just give up and quit, yet there was always someone there to get me to the top and finish the ride.

Now I’m going to take you on a different type of bike ride on roads named Post Traumatic Stress Disorder (PTSD), Traumatic Brain Injury (TBD), and Military Sexual Trauma, (MST). These roads have hills named depression, nightmares, anger, sleeplessness, hopelessness, isolation, anxiety, stress and loss of interest in life. These are just some of the many mountains on this ride.

Twenty-two service members a day, nationwide, either during service or after service commit suicide. Others fall to alcohol and drugs to help deal with their symptoms. Some overdose. Some make bad decisions and are incarcerated, sometimes up to life. Others have difficulty adjusting, unable to maintain a job or become homeless with little to no desire to make a change in their life. Couples divorce and families are torn apart, only compounding these symptoms. But the good news is All of this is preventable!

The vision of The Highground and Camp Victory is to foster that prevention — assisting Veterans to overcome those hills in life with not just hunts and veteran retreats, but by adding couple’s and family retreats and the most important gift of all – relationship with other Veterans.

With the help of mental health professionals, our goal is to provide Veterans with the tools needed to help overcome adversity, provide continued support and make lifetime friends. Couples or families can get away from the stressors of life and focus on what’s important, each other, and start the process of healing.

The Highground and Camp Victory is a place where they can build a bond with others that have the same struggles and provide each other with a strong support system. We invite you to read more on how you can help us help our Veterans climb their mountains with a gift to our capital campaign.

Will you please help?